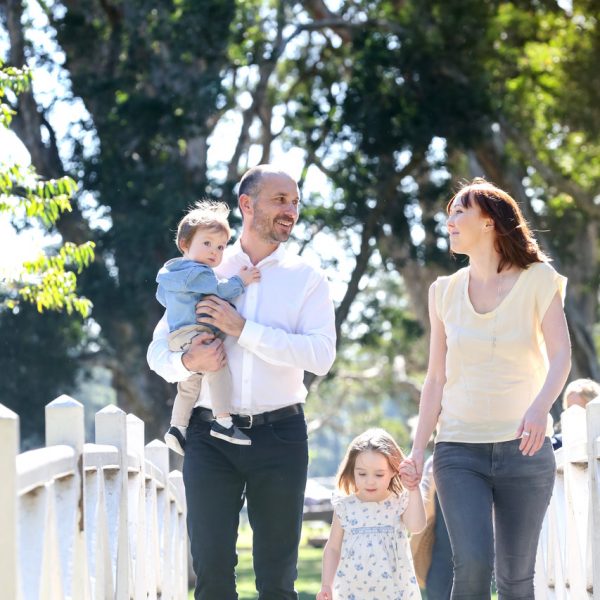 It was a Sunday morning in 2014. I’d arrived home from breakfast to a find newspaper article positioned conspicuously on the coffee table. ‘Women over 35 should stop being so fussy,’ read the headline, followed by some observations by a male fertility specialist. I smiled sarcastically and thanked my mother for cutting it out.

Inside, my chest roared with anger. How could a male fertility doctor know what it’s like to be a single woman in Sydney? I was thirty-six years old and had been dating non-stop for two and a half years. RSVP, eHarmony and Tinder – I’d just clocked date number 100. Was I being too fussy?

Let me skip back two years. I woke one Christmas on a fold-out bed in the garage of some friends, the same fold-out bed I’d slept on at Christmas as a child. I hadn’t been on a date for a decade following the death of my first love in a car accident. But that morning I sat and looked at the concrete walls of the garage and began to calculate. If I meet a man by next Christmas, it’ll take a year of dating to move in, another two before he’d agree to try for kids. By then, I’d be approaching thirty-eight. Yikes!

In the years I’d spent as a single woman, I’d focussed on my career. I’d built a business as a music manager representing artists Matt Corby, Evermore and Lisa Mitchell. I’d started two technology companies: Posse.com and Hey You – the app used by a million Australians to order and pay for coffee. I wrote a popular blog and gave talks at business conferences where I encouraged other women to strive for their goals. Surely, I had the skills to find a husband.

I decided to act. I’d approach dating in the same way that I approached business: start with a goal, break it into monthly and weekly objectives, then stick to it. I would not stop until I found happiness. I remember curling up on a beach with a Moleskine notebook making my plan for the year ahead. I wrote a heading: Personal goal. One date every week for a year.

I felt sick imagining myself listing myself on dating sites like a ‘for sale’ item at a market. What if someone from work saw me? But behind the fear I felt the emergence of something else: hope. 52 different men. That’s more chances than The Bachelorette.

I wish I could tell you that one of the first 52 was ‘the one’. I wish I could tell you that finding love is as simple as sticking to a plan. What followed was 138 dates in three years across Sydney, New York and San Francisco. I made some dreadful mistakes, I got humiliated and I had my heart torn-up several times. But I kept going. I made notes after every date, journaling lessons, guideline lists and ideas for improving my strategy. I enlisted a therapist and friends for advice.

If you are one of the 4.5 million Australians who’ll use an internet dating site this year or if you’re single and you’re not sure if you should take the risk, then this article is for you. I’ll describe the process I developed to manage a pipeline of 138 men, and who I needed to become in order to become ‘the one’ for someone else.

My first step was to set up a profile on eHarmony. I assumed that men on this platform would be serious about their search for a partner since you have to pay to subscribe. My first date was with Dan, a sales manager with Vodafone. Patches of sweat seeped through my shirt as I climbed the steps to the Winery where we’d agreed to meet for dinner. Our date was charming. Dan asked lots of questions and told me how nervous he’d felt coming out to meet me. This was his first online date too!  After a few evenings out together, it became clear that we weren’t a long-term match.

The next date was Julian, a professional video game player, who wore a StarCraft t-shirt and sneakers that would smell if he took them off. My therapist Ruth Osborne, told me to ‘hold my judgement’ and that ‘men arrive at a date with hope and fear just the same as women, so be compassionate.’ I suggested we switch restaurants to Sushi, since I could cut time from the date by ordering pre-made food.

I sat at my desk afterwards and began to refine my tactics. I felt yuck telling Julian that I didn’t want to go out again. And I needed to be efficient if I was going to find a husband in time to have kids.

In my business ‘Hey You’, I’d built a funnel to manage a pipeline of sales. Our aim was to fill the funnel with as many cafes as possible (prospects). Then we’d use filtering criteria so we’d direct our time to the cafes most likely to sign-up and pay.

I sketched a similar funnel for dating. To give myself the best chance of finding ‘the one’, I needed to increase the quantity of leads in the top of my pipeline and put in place more structured filters. If a business wanted more leads, it would look for new channels: eHarmony was just one channel. I signed up to RSVP and later Tinder, attended courses and events where I might meet potential dates, and asked my friends for introductions.

Every Monday and Tuesday night, I fired out first contacts to men on the dating sites. I tested different messages to see which ones got the best responses and I copy and pasted templates into a google doc. I’d choose three men that I’d been chatting to online for phone calls on Sunday afternoons, then asked just one for a date, always on Thursday evenings at the same bar around the corner from my apartment. We’d meet for a drink at 6pm so there’d be enough time for me to suggest we stay for dinner if the conversation was going well.

It might seem clinical, but the process worked. Screening calls helped me to avoid sleazy characters and men who weren’t a match – saving their time and mine. I began to think of my Thursday night dates as an extracurricular activity, like netball or art class.

It wasn’t easy. More than half of the men I met for dates didn’t call me again. A handsome lawyer, ‘Henry’, kissed me at the foot of my apartment steps leaving me all warm and gushy inside. I spent the next two days sitting on my couch staring at a silent phone on the coffee table and eating cinnamon scrolls for comfort. By Wednesday I was a sack of panic. Why didn’t he call?

I visited my therapist again. ‘How old is he?’ she asked

‘He’s probably not ripe,’ she said. ‘Men will often drift through dating and relationships, but their focus is on themselves, their career and their friends. Then, usually for a short time, they’ll soften and decide to look for the right person. You need one who is ripe, ready to be picked.’

I continued my Thursday night ritual and each rejection pierced my skin a little less. Until Matthew, a forty-two-year-old senator in the NSW Parliament. We had different values (me Labor / Green, him Liberal), but I was so captivated by his suave charisma that it didn’t matter. I acted demure and hid my opinions. A senator’s wife, I imagined, as I matched my favourite children’s names with his surname.

Two years later, on date 138, I met Rod, an academic from Macquarie University. By then, I’d documented a complete journal of lists and insights. I remember spotting his bright blue eyes under the arch at the Winery. The same eyes I’d swiped right on Tinder just a few days earlier. We fell in love in an instant and now have two magnificent young children.

My journey was one of finding the right person through clever thinking and relentless tenacity. And it was a journey of becoming the right person. I started out looking for all the wrong things in order to plug my own insecurities about not being enough (smart, tall, funny, high-status). With each date, I gathered insights. I learnt to regulate my emotions (no crazy midnight texting!), I learnt relationship skills and I let go of the ego and expectations that had blocked me from finding love.

I’m sharing this now because my partner and family are everything. If that’s something you want, then I hope my story encourages you to go after it with everything you have. I’m tired of reading just bad news about online dating. Yes, you have to be careful. Build a process, and don’t compromise on your filters. But the vast majority of my 138 dates were genuine decent men who were also looking for an emotional relationship.

Be willing to examine and let go of anything might be getting in the way. And please don’t give up; the end is definitely worth the effort. It is possible to find the perfect husband on Tinder!