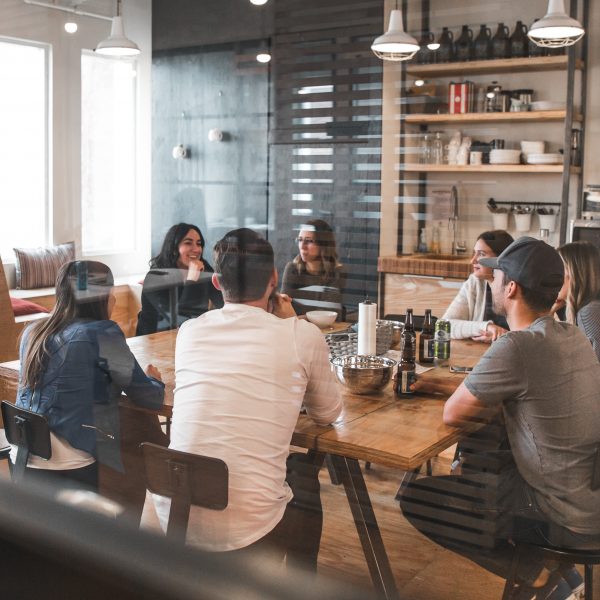 If networking terrifies you, try this approach

“No one is there to judge you,” says Business Chicks founder Emma Isaacs.

If networking terrifies you, try this approachThe open room at the Doltone House function centre in Sydney was vast and dimly lit as clusters of well-dressed professionals chatted in circles. I was early for one of the biggest charity dinners of the year, and I didn’t know anyone. The person who invited me wouldn’t be here for a while and had probably invited others. “She won’t want to babysit me all night,” I thought. I’d been looking forward to this event, but as I looked at the tightly formed groups connecting and reconnecting, droplets of water formed on my palms. “I don’t want to be the annoying person who disrupts a conversation. And I don’t want to look like Nancy no-friends.”

I walked briskly to the back of the room in search of the bathroom. I didn’t need it, but the journey gave me a purpose. I spent the next 20 minutes striding between the bar, the door and the bathroom trying to look busy, as if I had somewhere to go.Networking events and Christmas parties are wonderful opportunities to meet new people. But as I am an introvert, a room of strangers sets off a pounding rhythm in my chest. I wish I could seamlessly slip into a new group and make everyone laugh, but I wasn’t born with those skills. I’m softly spoken, much more comfortable in a one-on-one setting.

I do recognise the benefit of networking events. Every time I’ve made an effort, I’ve come away with valuable contacts who became clients or helped advance my career. And I always walk out feeling proud of myself for overcoming my fears.As we enter the social season again, I decided to ask for some expert advice. Emma Isaacs is the founder and global chief executive of Business Chicks, Australia’s largest network of professional women. Her company runs the biggest events in town, including sessions with actor Nicole Kidman, former prime minister Julia Gillard and Huffington Post founder Arianna Huffington, as well as its massive 9 to Thrive Summit.I asked Isaacs if I’m the only one who finds networking so hard. “Almost everyone will have some level of anxiety at a networking event,” she says. “You’re meeting people for the first time, and you’re not sure how it’ll pan out. Just remember that no one is there to judge you; they’re there to meet you. Relax and have fun.” Here are Isaacs’ tips on how to get the most out of networking events, especially if you’re shy and a bit awkward like me.

It’s not about an outcome

“Take the pressure off yourself,” says Isaacs. “Don’t focus on getting a return on your time or financial investment. Building a network is a long game. You might form a connection with someone who isn’t relevant to your business or career right now, but you won’t know when you’ll need to call on them in the future. Or conversely, when you’ll be able to help them. And it’s not a game of collecting as many business cards as you can. Aim to have a small number of quality conversations.”

How to gracefully enter a group

“You’ll probably need to break into an existing conversation to meet new people. This can seem daunting, but it’s really about understanding three small words: ‘Hi, I’m Rebekah.’ In 14 years of running events, I’ve never once seen someone rejected when they extend their hand and offer these three words.“If you’re sitting alone at a table, try to make strong eye contact with others at the table and practise active listening: lots of nodding and agreeing verbally with what’s being said. This shows you’re interested in the conversation and want to contribute. If you’re being ignored, then just ask the group if they’d mind if you join. No one will disagree.”

Focus on how you can serve others

“Once you’re in a group, ask lots of open questions. People will sense that you’re feeling awkward. The best way to overcome this is to take attention off yourself and ask questions of others. Networking is about being selfless and generous: if you know people in the room, then do your best to make introductions.”An hour after I arrived at the aforementioned charity event, my friend arrived surrounded by colleagues. She greeted me and moved on to greet the 10 others she’d invited to our table.I made eye contact with two guys sitting to my left, who turned out to be business reporters at The Sydney Morning Herald. Over the evening, I had four other quality conversations and agreed to stay in touch with my new connections.“Networking is an ongoing investment in yourself and your success,” Isaacs says. “It’s not just a tool for when you want to change roles or get more sales in the door. You must keep building relationships outside your existing circles.”